It’s huge.  It’s debilitating.  It can even be paralyzing.

In preparing our Goals 2014 audio course, I had time to reflect on the 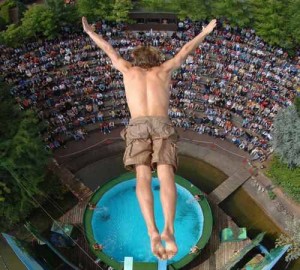 role fear plays in our ability to achieve everything we set out to.  As most of us have come to realize, fear may find its way into the dark recesses of our minds in different ways.

Psychologists tell us that the first and foremost level of fear that we face is fear of change.  We simply do not like change.  We hate it.  From a psychological standpoint, we’re actually wired to see change as potential danger.  It is fascinating to me how we can run into people nearly every day of our lives who know that their situation needs fixing,  but the fear of change and the unknown absolutely cripples them.  They would almost rather stay in a poor situation, rather than take the risk that change could actually work out better for them.  They are kind of like a baby in a poopy diaper, almost as if they were saying, “I know it stinks, but it’s warm and it’s mine.”  You know the people I’m talking about.  Fear of change is very real to them.  Maybe that’s even you.  If so, you need to realize that ALL significant change comes from leaving our comfort zone.  You just cannot have significant change without being a little uncomfortable, a little scared even.  That’s just the way we were designed.  Progress always involves risks.  Have you ever seen someone steal second base and keep their foot on first?  Just not possible.  We win when we have the foresight to realize that the upside on the other side of fear is a much better way of living.  That’s where our focus HAS to be – not on the “what if’s” that the fear of change brings, but the “what if’s” that the benefits of self-development brings.  And do you know what?  It gets easier each and every time you tackle this fear.  It’s almost like our psyche gets a healthy dose of “bring it on!” bravado when we successfully maneuver through change a few times. 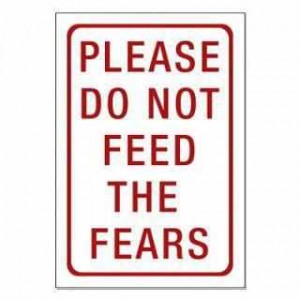 The second major fear that affects achievement is fear of failure.  I think we’re all familiar with this fear to some degree.  Haven’t you ever procrastinated and avoided doing something that you knew you wanted to do, something you knew you should do, because you allowed the fear of failure to hold you back?  I know I have.  But here’s the deal – FAILURE IS PART OF THE HUMAN EXISTANCE.  We are ALL going to fail, at least some of the time.  In fact, it’s literally impossible to succeed without failing somewhere along the way.  John F. Kennedy himself said that  “only those who dare to fail greatly can ever achieve greatly.”  Nothing could be truer.   In 1927, Babe Ruth set the all-time home run record for Major League Baseball that year, with 60 home runs.  That record went on to stand for 34 years, until Roger Maris hit 61 homers in 1961.  But what many people don’t know is that in 1927, when Babe Ruth was setting an all-time record for home runs, he also led the league that year in strikeouts.  That’s right – Babe Ruth failed at the plate in the 1927 Major League Baseball season more than any other player in the league that year.  You, see, “The Babe” understood that failing was a part of success, an actual part of the success process.

Michael Jordan, arguably the best professional basketball player the world has ever known, understood this.   When asked how he was able to be so successful, and elevate his game to a level far beyond the majority of his peers, Michael Jordan said,

“I’ve missed over 9,000 shots in my career. I’ve lost almost 300 games.
26 times I’ve been trusted to take the game-winning shot and missed.
I’ve failed over and over and over again in my life.  And that is why I succeed.”

See, Michael Jordan knew that in order to succeed, he needed to kick any fear of failure to the curb.  He understood that failure was part of the success process.  And that’s what other super achievers understand as well – that success is just a matter of trying new things, taking enough shots, swinging the bat enough times.  If you don’t swing the bat, you don’t get to be the guy or girl that hits the home run.  If you don’t take the shot, you’ll never be the greatest ever at your game.  And, as the famous quote by Wayne Gretzky goes, “You’ll always miss 100% of the shots you don’t take.”

There’s one final fear that keeps so many from achieving all they can, and that is the fear of success.  Huh?  That’s right – the fear of success.  Yeah, I know – it sounds crazy to even think about the fact that some out there are actually afraid of success and the challenges it brings.  Nevertheless, I run into people every week that appear to be holding themselves back because of this fear.  Maryanne Williamson said, “Our deepest fear is not that we are inadequate. Our deepest fear is that we are powerful beyond measure.”  There’s great truth in that. 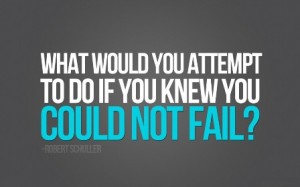 For some folks there is actually a fear that they will achieve something that will take them far beyond their spouse in development, so they choose to sabotage themselves and slam on the breaks of success.  Sometimes others fear that achieving a goal would take them away from their family and loved ones far too often.  So instead of seeking a solution that achieves both, they walk away from their full potential.   Often this is happening and the fearful person that is holding themselves back isn’t even aware of what they are doing.  It’s almost like they are unknowingly trying to protect someone they care about, someone they even love from their own success.  And here’s the sad part – in most cases those people they consciously or unconsciously think they are protecting want success for them as much as they do for themselves!

Here’s the bottom line: when we fear the outcome of an action, our natural survival instinct is to stop performing that action.  That’s it – that’s how we’re wired.  It’s only when we recognize those behaviors within us that we are able to go in and instead re-wire our thought processes and give ourselves permission to succeed.

So kick fear to the curb right now, and definitely as you head into 2014 and beyond.  Give yourself permission to succeed.

Next time, I’ll share what happens when we allow fear of change, fear of failure and fear of success to run unchecked in our minds.  In the meantime, do you have a story or experience where you overcame one of these fears and experienced achievement on the other side?  Please comment below and tell us!

We want 2014to be your best year ever.  Design your plan for success – download the opening module of our Goals 2014 audio course completely FREE!  Download instructions are here.