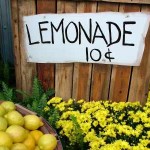 I need to introduce you to Gabriella.  She is eight years old and in the third grade.  She likes Eggo Cinnamon Toast Waffles, the movie Soul Surfer, and talking to herself when she’s in the shower.  She remembers EVERYTHING, so you better not make her a promise that you don’t intend to keep – she’ll call you on it.  She collects Dreamy Eyes animals like a dog collects fleas.  And I know for a fact that she hates it when her dad drops her off at school and yells loudly as she walks to class, “Gabriella, you’re the prettiest girl at school today!  You rock!  You’re the best!  Make good choices!”  For some reason beyond my understanding, Gabriella finds that degree of public display embarrassing.

The reason I know Gabriella so well is because she lives with me. 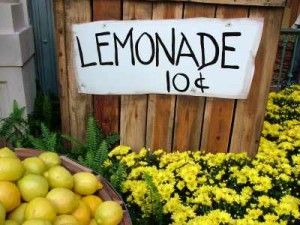 She’s pretty cool – ask anybody.  So when Gabby asked me to assist with her lemonade stand, of course I was all in.  I had purchased this super cool lemonade stand for her through Groupon in 2012, and we had tried it out a couple of times.  This last Thanksgiving, Gabby decided that it would be a good idea to spend the holiday weekend selling lemonade in our neighborhood.  She already knew about the concept of cost of goods, so we agreed that I would purchase the supplies and provide a starter amount of money to make change with, and she would reimburse “the bank” from her sales.  We prepped the night before and headed out to meet what was sure to be a very thirsty public on Black Friday, the day after Thanksgiving.

Wow.  I have never seen Gabriella work that hard.  I have never worked that hard.  I envisioned a nice afternoon in the sun, reading self-development material and providing the familiar fatherly moral support.  It didn’t quite work out that way.  I spent the next two days shuttling more and more lemonade to the stand, which Gabby sold.  And sold.  And sold.  As the time passed, I started to notice some patterns about business and life that kept repeating themselves.  Soon I had my journal in hand and was taking notes as I watched this eight year old entrepreneur interact with her new-found customer base.  In no particular order, here are just a few of the really cool things I learned from my daughter that day:

Lemonade Lesson #1:   Your customers want you to succeed. 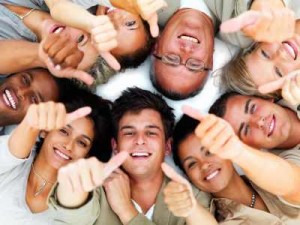 Let’s face it – the majority of people we run into day by day are good people at heart.  Yeah, there’s some folks really struggling with anger and disappointment and other issues out there, but fortunately those people tend to shy away from lemonade stands.  Because Gabriella had sold lemonade before, she knew to be prepared for the question, “WHY are you selling lemonade today?”  She had her answer ready – she was saving up to buy a dog.  Is there a better reason for an eight year old than that?  As individuals, we LOVE our causes.  We love to be a part of something that matters.  Something that is making a difference.  When someone “Likes” Integress Solutions on Facebook or signs up for our email distribution, we call it “joining our Tribe.”  In spite of the fact that it was a very busy weekend for most, those who stopped by were overwhelmingly supportive of this little girl who was saving up to buy her own dog.  This resulted in smiles, high fives, and extra tips along the way.

Lemonade Lesson #2:   Listen to your customers.  They will tell you what they want.

The first time that Gabriella sold lemonade, she also sold Cracker Jack, Gatorade and bottled water.  News Flash #1:  people don’t flock to a lemonade stand to buy water.  They want lemonade.  She sold a few Gatorades, but mostly to kids.  So this time we decided it was lemonade or nothing.  It worked.  Almost too well, as a matter of fact.  We kept running out.  Gabriella’s “product supply chain” (me) kept running back to the store for more supplies.  This is where News Flash #2 comes in:  most people really DON”T prefer freshly squeezed lemonade made from scratch.  It’s too hard to get the right taste mix. 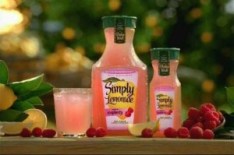 like Simply Lemonade.  Now, to some of you that may sound like cheating, but it’s what the market wants.  So that is what we sold – Simply Lemonade.  One small problem:  by the second day, we had bought out all of the Simply Lemonade at our local store.  As I stood there in the juice aisle, pondering the gravity of my young entrepreneur running out of product, the Simply Lemonade Raspberry Lemonade caught my eye.  As a side note, if you’ve never tasted the thrill of this Nectar from the Gods running down your throat on a hot day, trust me – you need to.

It turns out that I wasn’t the only one that finds Raspberry Simply Lemonade irresistible.  It sold better than the traditional version.  We ended up with plenty of lemonade to sell, Dad got to be a hero, and we both learned a valuable lesson:  you don’t always know what your customers want.  You may think you do, but only through asking and experimentation do you really find out what they want to buy from you.  And if you have a bad product, good luck trying to sell it to a public that isn’t interested.

Lemonade Lesson #3:   It doesn’t matter if someone else got there before you.

Gabriella may be the coolest young entrepreneur in our neighborhood, but she wasn’t the first.  We have seen lemonade stands and tables before.  A couple weeks prior to our outing, we saw another group of girls around the loop from where we live.  Gabriella knew they were out there, but she also knew that she had some advantages.  First, she had a really cool stand to catch the attention of someone driving by.  Also, she chose her location carefully, choosing to place her stand two blocks away from home at a 4-way stop that is near both elementary and middle schools.  Finally, she had prepared her presentation and had already filed away answers in her mind to potential questions she could face.

Isn’t this the reality of business today?  Very few products are true “first-on-market.”  Location, preparation, and presentation are everything.  That’s not going to change anytime soon.  When I teach success principles, I know just how many others are out there.  Jim Rohn used to say that there were no new success principles.  “Beware of someone coming up to sell you new antiques,” he used to say.  And he’s right.  What I teach at Integress isn’t anything new.  Dave Ramsey, the outstanding financial counselor, says that all he teaches in his business are just principles that he has learned “from God and your Grandmother.”  His success is based largely on his ability to be a dynamic speaker, show a legitimate passion for his product, and the ability to package his principles in a fun and interactive learning environment.  When we teach success principles at Integress Solutions, we follow the exact same set of criteria. We know that how we do what we do, how we set ourselves apart, is crucial in our solution to assist others in leading more enriching lives.

Lemonade Lesson #4:   In case there was any doubt, your kids ARE listening to you.

Okay, so this last observation is one I need to throw in for all the moms and dads out there.  Your kids are listening and watching.  Even when you think they’re not.  You see, we started teaching Gabriella about money and debt in 2008 when she was only four years old.  Gina and I had made the decision to get out of debt forever and change the legacy of our family.  Changing a legacy means a new message.  So we started teaching 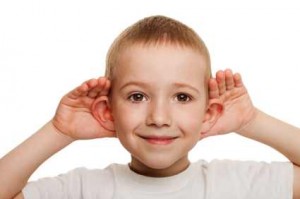 Gabriella that money comes from work.  We taught her how to use three envelopes – one for saving long term, one for giving to others, and one for spending.  Through repetition and her seeing tangible evidence of her success, it stuck.  I got to spend eight hours over those two days, watching my 8 year old sharing with her customers.  She told them that, in addition to saving for a dog, she would be taking 10% of her earnings to church on Sunday, and that she hoped to use some of her profits to buy Christmas presents (which she ended up doing, by the way).  Now, THAT’S cool stuff for a parent to see.  She wasn’t prompted.  We didn’t need to remind her about Christmas, or tithing, or any of that.  It’s ingrained in my daughter’s DNA now. The legacy IS changing.

So, how did the Great Lemonade Experiment come to a close?  After eight hours across two days, Gabriella was ready to pack it in.  She had grossed over two hundred and twenty dollars, selling each lemonade for a dollar per cup.  After paying the Bank of Dad back for cost of goods, her net profit was a little over one hundred and eighty dollars.  The next day she took her $18 dollars and gave it proudly to the Children’s Ministry at our church.  Over the course of the next week, Gabby decided that a dog could wait.  She chose to get a few Christmas gifts and save the rest.  She is a saver and not a spender by nature, so as I write this nearly 90 days later she still has about half of her lemonade stand profits, sitting in an envelope.  Since her last taste of entrepreneurial success, she has crafted a bigger and better plan – dog walking.  The neighborhood where we live has canines on every corner, and she is busy crafting a way to provide a valuable service to her neighbors who are too busy or unable to walk their own dogs.  She is designing business cards and is requesting a cell phone to book appointments with.  What’s a father to do with an eight year old that thinks she’s old enough for a cell phone?

Sit back, smile, drink some raspberry lemonade, and watch the legacy change.