I need to introduce you to a really cool kid I know.  Well, at sixteen years old, he’s hardly a kid anymore – much more like a young man headed into adulthood.

I first got to know Westley Burrington when he was about nine or ten years old.  For those of you who have heard my story, you may remember that several years back before I ever started Integress Solutions, I took a second job at night in a grocery store.  Gina and I had decided at that time that we wanted to be debt free, and we had agreed that working a second job at night was the fastest way to make that happen in our lives.

During those years at the store, I got to know Westley fairly well.  See, West is a Boy Scout.  And just like the Girl Scouts of America sell cookies, Boy Scouts raise money selling something as well – popcorn.  Not nearly as glamorous or world-famous as those impossible-not-to-buy cookies, but tasty popcorn nevertheless.  So I would get used to seeing Westley every year around August, and other times throughout the years as his troop sold coupon books from local businesses.  From the moment I first met him, he was friendly, energetic, comfortable in himself, and a masterfully gifted salesman.  And when I say gifted, I’m not joking  – the boy can seriously sell (more on that later).  Over the years we became friends, and it was always a joy to see West come around again for another year of selling.

So when his dad Steve called me the other day to let me know that West was receiving the honor of Eagle Scout, I knew I needed to be there.  An Eagle Court of Honor is a pretty cool thing to experience (I had been to just one before), and it was entirely honoring to be invited to participate in such a special moment in this young man’s life.

The ceremony was everything I had expected and hoped it would be.  As I sat there in the audience that day, I watched a parade of family members, fellow scouts and troop leaders share their stories about West and bring a wonderful sense of celebration to the occasion.  As I listened to them compliment and honor West, I started reflecting on my own experiences of watching him at work, selling popcorn and interacting with shoppers.  I started thinking about what traits that he possessed that most surely assisted in his success.  And you know what?  They’re the same traits that we teach day in and day out at Integress Solutions.  The habits that I saw displayed in this young man year after year are the same ones that can bring you and I success in any area of our lives as well.

So, to honor Westley today, here are just a few of the winning traits he possesses that you and I can learn from:

1. Tenacity and Discipline.  I remember Westley being simply ferocious when it came to selling.  During the “popcorn” season, he would hit the store every day, even when it was cold, even when his other troop members weren’t there.  As he got older, he sometimes showed up later in the evening, as the growing demands of his school work advanced with his grade level.  Sometimes he only came by for 30 minutes or so to sell a few coupon books before bed.  But he made it a priority, a focus – nearly every day during the selling season.

Do you know what happens to people like Westley, who are able to maintain the self-discipline that it takes to show up at the gym when they don’t feel like it, to say “No!” to that second slice of chocolate cake, to have the staying power to complete that ugly task at their desk that they would rather put off until later in the day, if not tomorrow?

They ride in helicopters, of course.  As in three times. First prize for the Boy Scout with the highest sales each year in Orange County where we live is a helicopter ride.  Westley won, and he rode – three times out of the six years he sold product.  I can’t help to wonder which night it was where he was tired, distracted, or just simply “not feeling it”, where he showed up anyway and that night ended up putting him over the top.  Success always comes from doing the little things, over and over again, compounded over time.  If West can have the discipline, I know you and I can as well. 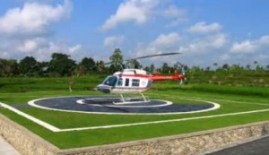 Wanna ride in one of these? Just sell a LOT of popcorn!

2. Preparedness.  Another reason why Westley sold so much popcorn was because he was prepared to.  Yeah, that sounds like it should be obvious, but when you work a few years in a grocery store you see a ton of kids that have no idea how to approach someone to make a sale.  Westley had his thing down.  When I was inside the store, I used to encourage the clients to step outside and listen to “ the finest sales presentation I had heard all day.”  West was an expert on his product.  He knew what local stores were represented in this year’s coupon book, and he could tell you which ones were missing from the year before. He could speak to any of the popcorn flavors and tell you what was the best seller and which one was his favorite.  He knew the answers to your questions before you even asked them.  I found out recently that preparedness is a cornerstone of the Boy Scout creed, and Westley embodies that.  When he shows up, he shows up ready with his A Game.  Another lesson for us all.

3. Surrounding yourself with the right people.  If you listen to some of my audio or read very many of my posts, you already know that this is a big deal to me.  Who we choose to allow in our circle of influence plays such a huge role in our ability to be successful.  Steve and Lisa, Westley’s parents, have done a wonderful job in leading him in this area.

Now is the time to reveal what Westley calls his “secret weapon” – his sister Aubrey.  I have never in my life seen a sibling so supportive, so caring of her brother, so enthusiastic to help as Aubrey has been over the years to West.  When he was at one door of the grocery store, she was at the other.  Yeah – she’s cute and bubbly and all smiles, and I’m sure she helped to sell a tin of popcorn or two over the years, but that’s not my point.  She never acted “forced” when she was at the store helping West.  I never got the sense that she wished she was somewhere else, playing or hanging out with her own friends.  Steve and Lisa have always reminded their kids that their family was a team, and you could tell that Aubrey truly wanted her brother to succeed.  And that’s what we all need – people surrounding us who believe in us and wish for our success as much as we do.

But Westley’s circle of influence doesn’t stop with his family.  I found out the other day at the Eagle Court of Honor that he and Steve belong to a men’s group who call themselves the “Band of Brothers.”  These men and their sons share a common faith and meet together regularly to support, mentor and encourage each other.  At one point in the ceremony Steve asked for all of the “Brothers” who were present to stand, and suddenly the room was full of twenty or thirty men on their feet – men who had taken the time to listen to West over the years, to teach and mentor him, to help him on his path towards manhood.  And here’s the cool part – Westley has been a part of the Band of Brothers along with his dad Steve since he was six years old.  For ten years, he has been supported and guided by these men that he has allowed into his circle of influence.  Again, who we allow into that circle in our own lives matters as much as any other success principle out there. 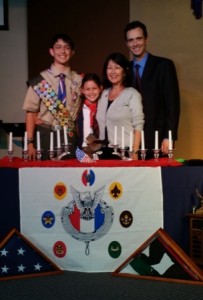 4. Optimism and Faith.  All of the things I’ve shared above have contributed to Westley’s success, but I think this attribute is his true calling card.  West is perhaps the most optimistic young man I have ever known.  The kid always seems to be positive.  He always seemed to have a spring in his step whenever he approached a potential sale.  He smiles.  He’s genuine.  His faith in himself and his God is strong.  This was evidenced every time he finished a conversation.

You see, some people bought Westley’s  popcorn.  Others didn’t.  Some politely listened to his sales pitch before they said no, while others ignored him or were even abrupt and rude.  But Westley ended every transaction (or lack of one) the same way – with a hearty “God Bless!” as the person walked away.  And when Wesley said it (or still says it today), I hear it in his voice.  He believes it.  His dad Steve shared with me recently that many people came back from their car after they had already declined, saying simply that they were drawn back by Westley’s attitude and demeanor.  As Steve and Lisa have taught both of their kids from a very early age, attitude truly is “everything.”

Westley is an inspiration to me, as I hope he is to you as well.  He didn’t just sell a lot of popcorn.  He didn’t just do a lot of camping or earn a lot of badges.  He worked hard.  He sought wise counsel and listened to the wisdom of others.  Like any good Boy Scout, he gave it his very best.  And the result – at sixteen he has already learned how to move the needle of humanity and to leave ripples of his presence in the lives of others.

So, here’s to YOU, Westley.  Congratulations on earning and receiving this special honor.  Enjoy it, but of course remember that it’s only another milestone on your journey.  Thank you for reminding us all of the key things, the simple things that each of us can do each day to tilt the scales of success in our favor.

And now to the rest of you, it’s your turn.  Go Win Like West!

Something to share, or just want to congratulate West?  If so, please comment below and tell us!